What is Solar Computing?

The need today is to run computers in every corner of the country. Government, BFSI, Education and FMCG, all sectors depend on ICT for effective execution. However, the power situation in India does not permit the use of computers in large parts of rural India.

SPV based solar power generation has emerged as a reliable and efficient power source for those locations that are not connected to the electricity grid. Thinvent’s solar computing solution is designed specifically to allow computers to be run from SPV based solar power.

In this document, we will study some of the facets of a solar computing system. We will also see how such a system is different from an ordinary PC connected to a solar power generator. Briefly, a solar computing solution should: Working of a Solar Power System

Electronics consume and produce Direct Current. Electronic equipment such as LCD TVs and PCs, contain an SMPS that converts AC power to DC power. The utility (grid) power is plugged into the AC input of the SMPS, and the electronic components of the equipment are connected to the DC outputs. Mobile phones, laptops or set top boxes are supplied with external chargers or adapters. These adapters convert the AC supply to the DC voltage required by the equipment they power.

Solar generation systems can also supply alternating current, thus powering normal electrical equipment. The conversion from DC to AC power is done by an inverter. The inverter used with solar systems is the same as that employed in home power-backup inverters – it converts the 12V or 24V DC power of the storage batteries into the 230V AC power required by electrical equipment. 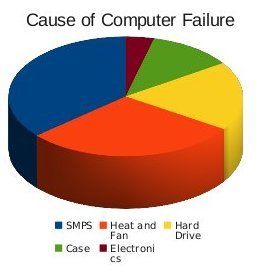 The usual approach to running computers from solar power, is to connect together a solar generator, an inverter, and a computer that consumes AC power. This approach unnecessarily inverts the DC power of the solar panel into AC power, which is then rectified inside the PC’s SMPS to generate the DC power needed by its electronics components.

Inverters and SMPS are both failure prone equipment. They employ transformers and other components that fail under stress and age. For example, failure of mobile phone chargers is a common occurrence.

The second problem with inverters and SMPS is efficiency. Solar inverter efficiency ranges from 90% to 95%. SMPS efficiency is south of 80%. That’s a net efficiency of only 70%. 30% of the solar power generated is lost in inversion and rectification! The Cost of Solar Power Even at this high cost, there is no alternative to solar power. Large parts of India are still not connected to the electricity grid, and solar is the only option available. What’s more, these are the same underdeveloped areas of the country that can benefit the most from the e-governance and education projects that solar computing projects enable.

While solar power may not have alternatives, the onus is on us to utilise it efficiently. Every watt of power consumption reduced from our computer, saves more than Rs.200 in capital expenditure. Thinvent, through its significant R&D investments, has scaled down computer power consumption by a whopping 85%. While a PC consumes 120 to 150W of power, Thinvent’s solar computers consume only 10 to 20W of power! The Cost of Transport and Servicing

Once installed, the equipment needs to be serviced. Transport costs, and the technician time lost in travelling, are large parts of the total cost of service. In an urban setting, servicing is done locally. The maximum travel distance is 10 to 50 kilometres, depending on the size of the city.

In a rural setting, trained solar or computer repair technicians may be hundreds of kilometres from the site. Rural servicing therefore has very high cost of man-power time and transport. The solution is to procure reliable equipment that requires less servicing. Every Rupee spent on reliability, comes back many times in the form of long life and less failure of the equipment. 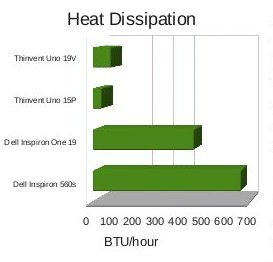 Heat and Dust – The Silent Killer

Heat is the single biggest cause of equipment failure in a tropical country like India. Electronics convert the electricity they consume into heat. This heat causes their temperature to rise. To keep the electronics cool, manufacturers use fans to cool the interiors of a computer.

Fans have a strong relationship with the dust, the other big killer of computers. As the fans circulate air, the dust in the environment enters the computer, depositing on its electronics and fans. This dust slowly chokes the fans. Most users don’t even notice this slow death of the fan. Computers also do not report the failure of a fan. Soon after the failure of the fan, the components it was protecting will fail. The result – expense in servicing, and in component replacement. The second problem with fans is that they consume energy themselves. Thus, to expend the heat energy generated by the electronics, we are consuming further more energy. Thinvent builds its computers using cooler running components, which not only consume less energy, but also do not need energy-consuming fans to run. Thinvent also uses components that are rated to run at higher temperatures, thus eliminating the need for fans.

The final problem with fans is that they are moving parts. Any moving part has a limited life, and needs periodic replacement.

In a rural area, it is more difficult to control ambient dust in the computer room as compared to urban areas. Rural environmental temperatures are also higher than urban, in the absence of powered cooling devices such as ceiling fans and air-conditioners. Thinvent’s solar computers completely avoid the use of cooling fans, elongating their life and minimising failures. At the same time, Thinvent’s computers run at higher ambient temperatures as compared to PCs. 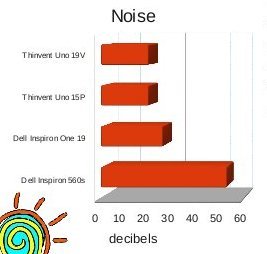 Let us now look at some case studies, which will help us highlight the cost and operational advantages of using Thinvent’s solar computing solution.

Let us take the typical scenario of running 10 computers in a rural school, for 6 hours a day. First we look at PC based costing:

Table 1: Costing of PC based computer solution for rural school Compare this with the costing below of our solution.

Over 10 computers, the cost is working out to just Rs.22,500 per unit, which is equal to the cost of a PC + ordinary UPS. Therefore, in our solution, the solar power comes free!

Telecentres provide rural populace with access to the ICT and eGovernance. Given below is the cost estimate for such a centre, operating 10 hours a day, 7 days a week.

Table 3: Costing of PC based computer solution for a telecentre 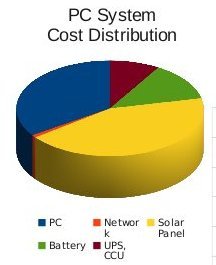 The above equipment requires diesel generated power and grid supplied power. The kiosk owner will generate diesel power for 6-8 hours a day, at a cost of Rs.12 per unit. The remaining time, he will operate on Rs.7 per unit grid power (commercial rate). This works out to Rs.4,600 per year. Apart from this, he needs to pay up to Re.1 per day power generation duty. And this does not even include the cost of operating the laser printer and scanner.

Let us compare this with the capital expenditure of procuring a purely solar powered solution from Thinvent:

Table 4: Costing of Thinvent’s solar computing solution for a telecentre 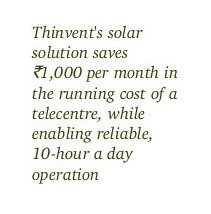 While the procurement cost of both solutions are identical, there is a saving of Rs.4,600 per year in running cost, and Rs.3,000 per year in maintenance cost. The hassle of securing commercial electricity connections in rural areas is also eliminated. One can practically set up shop in any location in ten minutes, with Thinvent’s solar computing system. 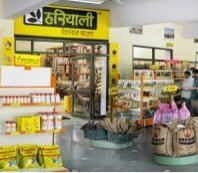 Let us first look at PC based costing.

Table 5: Costing of PC based computer solution for a rural retain centre 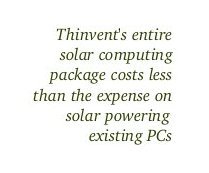 It costs at least `1,75,000 to provide solar power for an existing set of four PCs. In less than that amount, we can provide a complete new set-up that is solar powered and comprises of rugged, no-moving-parts, purpose-built transaction terminals.

We hope that through this document, we have been able to convey the cost and reliability advantages of using solar computers for rural ICT projects.

For more information, please feel free to contact us on the addresses given below. We’ll be happy to design a solution as per your needs.